WEGH innovates in a GREEN way, with the ARIANNA Ballast-free rigging system. A pre-compressed plate system to innovate and make our future more sustainable.

Guaranteed life cycle of up to 90 years.

Maintenance of the system, which is close to zero, causes a huge cost-lowering effect.

An innovative Tracking system that has product sustainability as its main focus.

The construction of an efficient railway line means first of all ensuring and promoting the movement of people and goods. All this without overpowering the surrounding environment, which must instead be respected.

Arianna ® is a patented technological product with pre-stressed reinforced concrete plates that is perfectly suited to both traditional and high-speed lines. It is used especially on bridges, viaducts, tunnels and stations.

The name, “Arianna”, is based on a mythological tale: just as the character Arianna gave her beloved Theseus a ball of wool to mark the way through the labyrinth, so our ballastless track system ensures safe and smooth railway movement in every situation.

The Arianna® system consists of a series of pre-stressed reinforced concrete plates that are placed on a base foundation, with the interposition of a special screed, which guarantees the platform a homogeneous support, thus compensating for any irregularities in the foundation. It is also ideal when an existing ballasted railway line needs to be converted to ballastelss since this system allows the rail plane to be lowered.

In addition, maintenance costs, calculated over the entire life of the track, are significantly lower than those of a traditional ballasted system, because the Arianna® system does not require traditional maintenance and rehabilitation operations, such as tamping and leveling.

Arianna® is available in the Standard and Plus versions. The latter is designed for cases where high performance is required to reduce vibrations in sensitive points of the track, such as near residential areas, in tunnel sections and in stations.

Would you like to receive more information on the ballastless track? 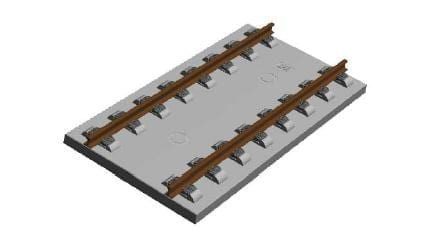